A Key Light, Not a Blinder
Chroma-Q’s Sandi 1622 provides users with the ultimate key light for video conferencing by providing tunable, variable intensity light from three different axes for full coverage, putting your face in its best light without blinding your eyes.

The Chroma-Q® Sandi™ is featured in the July 2021 issue of PLSN under RoadTest.  Thank you Nook Schoenfield.

I will preface this article by saying I have had limited success using the standard rush of key lights made for video conferencing that have appeared in the last year. I used a couple of them that I thought would help me, but I ended up being either blinded or lit unevenly with discerning shadows across my face. The Sandi, on the other hand, is professionally designed to be the best fixture for this application I have found, with the end result leaving me satisfied that I had been properly lit for the camera.

Putting it To the Test

At first glance at the Chroma-Q Sandi 1622 for this Road Test, I noted a sturdy fixture that resembles an open picture frame on a self-supporting stand. The Sandi is meant to sit on a table or desktop. Six rubber pegs keep the aluminum unit from touching or sliding on the surface it sits on. The 1622 reference number alludes to the 16-by-22-inch (HxW) opening space which users can simply place their laptop in front of. Users can also easily mount a monitor, personal tablet, or smartphone to a holding accessory that is included with the product. This hanging hardware is simply attached to the fixture at the bottom with a couple of screws and wing nuts. The frame has sliding top and bottom brackets (holders) to adjust the height of either a tablet or phone camera, also held in place by hand-tightening some wing nuts. The fixture itself weighs nine pounds, which makes it light enough to be easy to carry around, but heavy enough to stand its ground from being bumped over accidentally.

Around the two sides and top perimeter of the face are white frosted panels that diffuse the white light LED source. These two-inch wide panels of soft light illuminate me from three different axes with all the necessary angles, eliminating any presence of raccoon eyes or dark spots under the chin and nose. If you’re wearing a cowboy hat or ball cap, rest assured that all parts of your face will still be illuminated because of the 110° beam spread.

Setup is simple. A 20V DC power adapter plugs into an Edison outlet delivering power through a USB-C connector located by the control panel. There is an additional charging USB port above this connector to allow 1.5A of power to whatever device you may be hanging in the center of the Sandi. The power draw for the fixture at full intensity and 6000K color temperature is 75 watts at 20V. The lumens outputted are maxed at 1580 under the highest color temperature, lowering slightly as one lowers the color temperature.

The Sandi is easy to use and comes with some great options for molding the light output on your face. On the lower right front side of the unit are an OLED display (control panel) and two knobs. The knobs in their default settings control two things — intensity and color temperature — of the whole unit. The user can look at their own image on their laptop camera and adjust these levels to their own personal satisfaction. At full, the fixture can light up a group of people several feet away from the fixture — sitting on a couch, for example — easily. While sitting three feet away, I found 50 percent intensity to be bright enough, and a color temperature of 4800°K looked great on my white skin, eliminating the stark pale skin tone of someone that’s been inside all year. Because of the soft light output, I didn’t squint at the camera at all, which is especially important for business meetings. Once plugged in, there is no On/Off switch on the Sandi. Simply turning the intensity knob will turn the light on, returning the fixture to the previous settings it was at before last turning on. To turn the fixture on, I simply push and hold both knobs in for three seconds.

If playing your own cinematographer is something you desire, the Sandi divides the light output into two independently controlled sides, which Chroma-Q refers to as an “unbalanced load.” It is possible to light one side of your face with a higher intensity, and users can cast slight shadows on the less lit side of the face. (Note — users can turn one side completely off). Same with color temperatures. Simply pressing just one knob will bring up a divided menu for two intensities, left and right. The same process affects the color temperature knob. This is a great feature if you are sitting by a window that’s giving you uneven light.

One may want one side of their face to appear as a higher color temperature than the darker side. Users can play around with these settings easily by pressing one knob to bring up a new menu with split L-R values. I do note that the intensity parameters, once locked in individually, can be adjusted proportionally by the master intensity knob. For example, if one side is set at 25% and the other at 75%, raising the master or overall level will increase both sides the same number of points. Short-pressing both knobs simultaneously will average their values and reset both sides to equal levels of intensity and color temperature.

The fixture is convection cooled and thus silent. The black anodized aluminum structure is sleek and comes with an IP20 rating that can take a splash of liquid, so if someone makes you laugh and spit out your coffee in a meeting, you’re not going to harm your Sandi. The PWM is permanently set at 25kHz, so the light will not affect the camera flickering. The fixture will work efficiently in a wide range of temperatures, from 32° up to 104°F.

The sleek design and 10-pound weight (with the power supply) make it a cinch to move one-handed from off to the side to your workplace. It takes up so little space on my desktop that I will leave mine permanently in place. The Sandi can make you look good no matter where you are — in your office, live at a shoot, or in your dim basement. With a 50,000-hour lifetime on the bulb, this fixture should last for life. 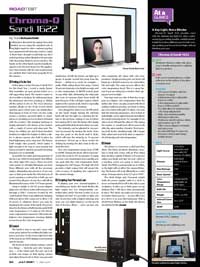 Please note: product specifications, pricing and details are subject to change without notice. Please refer to the manufacturer's website for the most up to date specifications and product details. All prices on this website are in USD.

Are you sure you want to perform this action?